What Are the Top Greenhouse Gases? 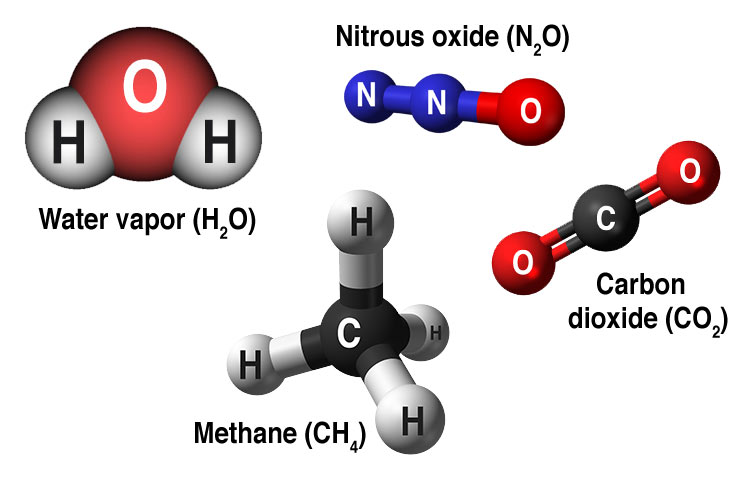 As discussed last week, life on Earth depends on energy coming from the Sun. The greenhouse effect enables us to live here. About half the light reaching Earth’s atmosphere passes through the air and clouds on the way to the surface. The light is then absorbed and radiated upward in the form of infrared heat. About 90 percent of this heat is then absorbed by the greenhouse gases and radiated back toward the surface.

The main greenhouse gases are:

Water vapor (H2O)is water in the form of gas. Think of it like steam from a pot of boiling water or water evaporating from the surface of a pond. The vapor forms clouds and then it rains on Earth. This often causes a cooling effect, but the water vapor blocks heat from escaping so it acts like a greenhouse and makes Earth warmer. The warmer Earth makes even more water evaporate, and the cycle continues.

Carbon Dioxide (CO2) consists of carbon and oxygen. It is all around us, and comes from natural sources including volcanoes, and from combustion of organic matter such as coal, oil, and natural gas. It also comes from the respiration processes of living aerobic organisms. The average human exhales about 2.3 pounds of carbon dioxide per day. A person exercising vigorously can produce up to eight times as much CO2. The main human-made source of CO2 is from burning fossil fuels for electrical power generation and transportation. For example, the average gasoline-powered car emits about 30 pounds of CO2 per day.

Methane (CH4) is gas found in small quantities in Earth’s atmosphere. It is the simplest hydrocarbon, consisting of one carbon atom and four hydrogen atoms. Simple, but a powerful greenhouse gas. Methane is flammable, and is a principal component of natural gas. Methane is released from wetlands, growing rice, raising cattle, burning natural gas, and mining coal. Although a small component of the greenhouse gases, it traps a lot of heat. Scientists consider it the second most important contributor to warming of the Earth.

Nitrous oxide (N2O) is a colorless and odorless chemical compound also known as “laughing gas.” When inhaled, the gas slows down the body’s reaction time, and produces a calm and euphoric feeling. I remember receiving it from my dentist some years ago as a sedative. It was first used by a dentist in the mid 1800s, and is still used by dentists today. The use of nitrous oxide is considered safe with few side effects. Nitrous oxide is produced by bacteria in soil and the ocean. Nitrous oxide is released by some types of factories, power plants, and plant fertilizer. It is considered a powerful greenhouse gas, but the greater concern is it damages the protective ozone layer.

There is much more to know about each of the five greenhouse gases described. Some of the gases occur naturally and some are by-products of things done by humans. In another article, I will give some specific examples and describe how you can calculate what your own contribution to greenhouse gases may be. Stay tuned.