Master of His Digital Castle 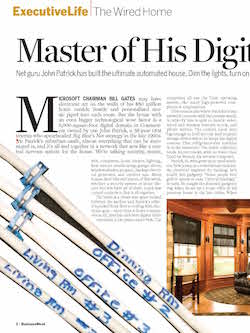 Microsoft (MSFT) chairman Bill Gates may have electronic art on the walls of his $50 million home outside Seattle and personalized music piped into each room. But a house with an even bigger technological wow factor is the 6,000-square-foot digital domain in Connecticut owned by one John Patrick, a 38-year IBM (IBM) veteran who spearheaded Big Blue’s Net strategy in the late 1990s.

At Patrick’s suburban castle, almost everything that can be automated is, and it’s all tied together in a network that acts like a central nervous system for the house. We’re talking security, music, TVs, computers, home theater, lighting, heat and air conditioning, garage doors, window shades, propane, backup electrical generator, and outdoor spa. Many homes have bits and pieces of this setup, whether a security system or home theater, but few have them all, much less central controls to link them together.

The brain is a closet-size space tucked between the kitchen and Patrick’s office. It’s packed from floor to ceiling with electronic gear—more than a dozen computers in all, plus his-and-hers digital video recorders, a CD player, and a VCR. The computers all run the Unix operating system, like many high-powered computers at corporations.

This room is also where Patrick’s home network connects with the outside world. A cable-TV line is split to handle video, wired and wireless Internet access, and phone service. The control room isn’t big enough to hold the one-half terabyte storage device where he keeps his digital content. That refrigerator-size machine is in the basement. His music collection totals 20,000 tracks, with no fewer than 7,000 by Mozart, his favorite composer.

Patrick, 61, who grew up in rural southern New Jersey, is a consummate tinkerer. An electrical engineer by training, he’s totally into gadgetry. “Some people love golf or sports or cars. I love technology,” he says. He caught the domestic gadgetry bug when he set up a home office in his previous house in the late 1990s. When he and wife Joanne decided to build a dream house on a leafy lane a few miles away, Patrick went into full propeller-head mode. “I wanted to automate everything that could be automated, as long as it was practical,” he says. It took two years to see his scheme to fruition. The Patricks moved into their new home in April, 2002.GADGETRY OVERLOAD

This wasn’t a one-man job. Patrick was assisted by Rob Gerhardt, a sales engineer from Phoenix Audio Video, an electronics contractor; a team of networking and electronics experts, as well as a software programmer. They put their heads together to design the system and customize the touch pads mounted on walls around the house.

A project like this can create serious headaches for homeowners. Patrick warns people not to make things overly complex. They might be too difficult to use, especially for family members who don’t appreciate gadgetry. Also, it’s hard to find contractors with a holistic view. Most know one thing well—say, security. This stuff can be frightfully expensive. And while Patrick declines to say what he spent on gadgetry, experts say automation can run to 10% of the cost of a new home. But if you do a few simple things, such as lighting, it won’t cost that much. Much of the gear is available at electronics stores.

My tour of Patrick’s digital life started at a touch pad on the kitchen wall, one of seven of these 5-inch-square pads strategically placed around the house. The ultra-simple interface looks and works like a Web page. There’s a menu of services on the left including climate control, security, lighting, and vacation mode. On the right: musical choices selected by artist, album, or genre come from cable, radio tuner, Internet, satellite radio, and CDs. You can control any electronic system in the house from any pad. “I’m not too technical,” says Joanne Patrick. “I don’t know how to program a VCR, but I can operate these wall panels.”

In addition to the touch pads, every room in the house has a 16-button lighting control panel. Besides switching on or off individual lights or clusters, the controls can activate what Patrick calls “scenes.” Press the “Go to Bed” button, for example, and the path to the master bedroom upstairs is illuminated, while downstairs lights are turned off.

Not all the features demand human intervention. Patrick scattered 50-or-so electronic sensors around the house and grounds to monitor the property. There’s one in every door and window. Sensors detect whether the sun is out and at what angle it strikes the house so shades are automatically drawn or opened. If a car pulls into the back driveway, a “beep-beep” sounds at each touch pad. From his office desk, Patrick can flip on his TV and tune to the “courtyard cam” channel, which shows the driveway. If he likes what he sees, he’ll press a button on the touch pad to open a garage door. Each of the household’s cars and motorcycles is rigged with a radio-frequency id tag so when one pulls into the driveway, the proper garage door opens.

Patrick’s outdoor spa, set in a backyard deck and surrounded with shrubs, may be the home’s coolest feature. From a comfortable spot in the water, you can easily reach a touch pad that’s embedded in a fake rock to control the jets, water temperature, and a mini-waterfall, and to adjust the volume on audio speakers hidden in other fake rocks. (Hey, they’re good fakes.) Sensors can also detect snow on the deck and automatically turn on heating elements to melt it.

Patrick can control his home automation gear from his laptop, via the Net, when he’s on the road. Once, when his alarm went off and the police paid a visit, he reset the security system from New Zealand. That’s the ultimate kick for Patrick: He sees his home as just another stop on the Internet.