I really prefer having an engine!

“I really prefer having an engine!”
Tuesday, August 20, 1996
John Patrick reflects on his early interest in flying
Interview by Nick Nash
IBM VP of Internet Technology John Patrick is best known today for his role in shaping the evolution of the Internet, but before there was the Web, Patrick took to the skies to enjoy the thrill of “flying by the instruments”. I was curious to learn how this unusual hobby began.
Q: What got you first interested in flying?
A: I was stationed at MacDill Air Force Base in Tampa, Florida during the Vietnam Era as a member of the headquarters of the U.S. STRIKE Command. Although I was an army draftee, I was stationed in this multi-service group on an Air Force base, and therefore had a chance to take flying lessons at a private flying club hosted on the airbase. I got my private license in a Cessna 150. 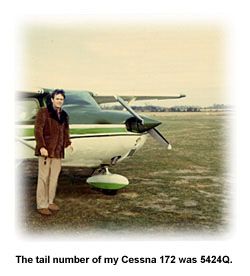 After leaving the army and returning to Bethlehem,  Pennsylvania, I was able to continue and earn my commercial pilot’s license in a Cessna 150 using the VA Benefits. A few years later, after moving to the Philadelphia area, I got my instrument rating and bought a Cessna 172 with two acquaintances. We shared it for a few years, but after moving to Armonk, New York, in 1981, with the busiest TCA in the nation, I decided this was a hobby I couldn’t continue.
Q: What’s a TCA?
A: The TCA, or Terminal Control Area, is a “control zone” which the FAA puts in place over key metropolitan area airports. The TCA is designed to improve safety by imposing a lot of rules and controls, but if you don’t fly in the TCA on a frequent basis you can easily forget the rules. It wasn’t the TCA per se that impacted my decision to stop flying but more the need I felt to fly on instruments a couple of times per week in order to stay sharp. Got to the point where I just couldn’t fly often enough.
Now I fly with the Microsoft flight simulator using the Logitech Wingman joystick that comes with the IBM Aptiva PC.
Q: What kind of trips did you make? What was it like?
A: I did some flying for business purposes, and at several occasions took customers to an IBM plant or laboratory for business purposes, and took family vacations. It was a weekend hobby. Flying “on instruments” was really a very intellectual hobby, very rewarding — it was fun. And by owning a plane with two other people, it was affordable.
Q: Have you tried flying other airplanes?
A: I’ve flown Piper Cherokees – they’re bigger than the Cessna. I also tried flying a glider once, but I really prefer having an engine. Maybe I’m a control freak, but I really prefer having an engine!
Q: How much have planes changed since you left flying? And what are some ways airplanes could benefit from the latest computer technology?
A: Not much can change on the outside. The basics of aerodynamics for a propeller driven airplane are centered around basically very simple ideas. You have thrust from the propeller and drag from the plane in the horizontal direction, and lift from the curvature of the wing and the weight of the plane in the vertical direction. Inside the airplane….well, I haven’t kept up with it. I’m sure the gauges are more digital than analog. Pilots might be using GPS, for example. I suspect that the accuracy and capability of autopilots and direction finders and VOR/VORTAC are significantly greater, and I suspect that these are the areas in which the most progress would be, moving forward. I know this is already happening in corporate and commercial jets.
Q: Do you follow amateur flying on the web, or do you subscribe to any flying newsgroups?
A: Not really. Back in the days when I was flying, there was no World Wide Web, so if you wanted to have a chat session, you did it in the hanger!
(1) STRIKE stands for “Swift Tactical Retaliation In any Known Environment”. This went on to become led by General Norman Schwartzkopf of Gulf War fame.
Related Links…

A daily travel journal (with digital camera pictures) of a trip from Buffalo to Alaska in a Cessna 172 in August 1996. The father and son team used an IBM Thinkpad 760E to upload images each evening and GPS hardware to stay on course.